If you ask ten people who fear public speaking what they fear most, I bet my left arm that eight out of ten would respond with some variation of, “I fear drawing a blank and bombing in front of my peers.” It’s no secret
that public memory lapse is considered by most people to be the only thing scarier than death. It may shock you to learn that memorizing your speech is one of the worst things you can do. If you have ever attempted to deliver a memorized speech and totally lost your train of thought, you may have fallen victim to the tightrope effect.

You are experiencing the tightrope effect when you step on stage and suddenly feel like you’re standing on a tightrope suspended 100 feet off the ground with no safety net below. Your audience anxiously looks on as you stand in the spotlight consumed with fear of making a false step. Every muscle in your body tenses in response to the panic signals sent from your brain. Your confidence slowly evaporates and all hope for audience connection eventually falls flat. 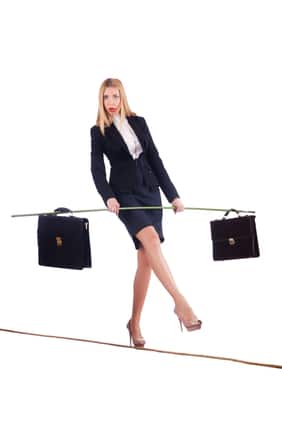 Most presenters make the mistake of thinking they’re stage ready once they have memorized their speech. I recommend you take your preparation a step further and internalize your speech.  There are only a few degrees difference between memorization and internalization, however the impact on your delivery is staggering. A memorized speech feels cold and sterile. Audiences are not persuaded when you sound like a robot who is mentally handcuffed to every word. An internalized message, on the other hand, feels like a warm and engaging conversation. Your energy and animation signals to the audience that you’re in the moment.

The steps below outline the process for internalizing your speech. Pay particular attention to steps four and five. They are the critical steps to making the transition from memorization to internalization.

The goal is to securely store your speech in your mind. If you follow the 6 Steps To Internalization, you’ll be surprised at how quickly and easily you will internalize your message.
If done properly your message will be trapped in your head like a catchy song. Internalization is the secret to supreme confidence. Are you ready to experience the magic of internalization?