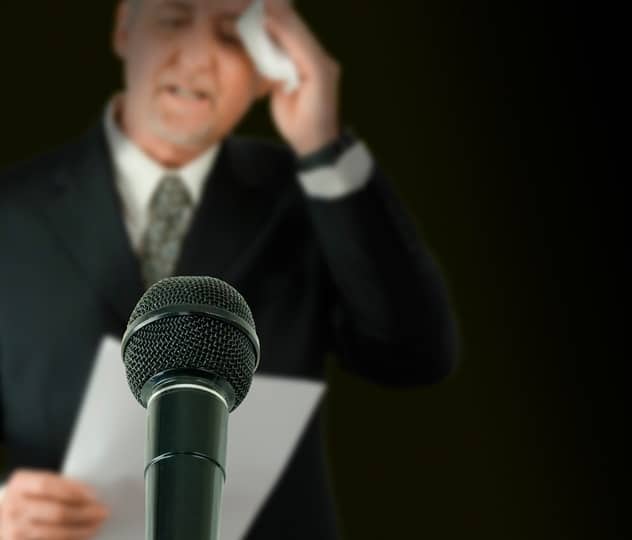 There are two schools of thought when it comes to nervousness and public speaking. Some believe that with practice you should be able to stomp out nervousness. I’m in the opposite camp that believes something is seriously wrong if you don’t feel a bit of nerves before you speak. Despite their differences, both sides agree that it’s important to get your nerves under control. In this blog, we’ll discuss your arms. The next blog will focus on your legs.

Pardon my inner nerd but the nerves you experience before and during presentations are a result of your brain sending chemical signals to your body letting it know you’re in danger. The funny thing is your brain doesn’t discriminate whether you’re nervous because you’re about to be eaten by a pack of hungry wolves or you’re nervous because you’re afraid to sound like a babbling idiot in front of a group of people. Once your heart starts pumping excessive amounts of blood to your extremities, your brain will start to flash indicators in the form of tremors, dry mouth or sweaty palms. Suddenly, you’re faced with two ominous choices, fight or flight. This is the exact reason why nervousness is most apparent in your arms and legs.

Here, we’ll look at how the symptoms of nervousness manifest through your arms. I’m sure you’ve seen a speaker stand in front of an audience with their arms either tensely folded (as if they were pouting) or tightly bent in an L shape position as they lightly tapped their widespread fingertips together. If they were to make a fist, you could easily mistake them for a boxer. The tension in your arms and protection of your abdominal area is your body’s fight response to your brain’s danger signals. Rule of thumb it’s never a good idea to fight your audience. Literally… let down your guard. How can you reasonably expect to connect with someone if you’re guarded?

The question of what to do with your arms and legs while speaking may seem trivial but if your body and your spoken language aren’t in sync, your audience will subconsciously sniff out the conflict and communication will fail. Work on your arms this week and next week we’ll jump into legs!

Dez Thornton is a Communications Coach who helps you say the right words in the right way when they matter most! For more information, see www.dezthornton.com.