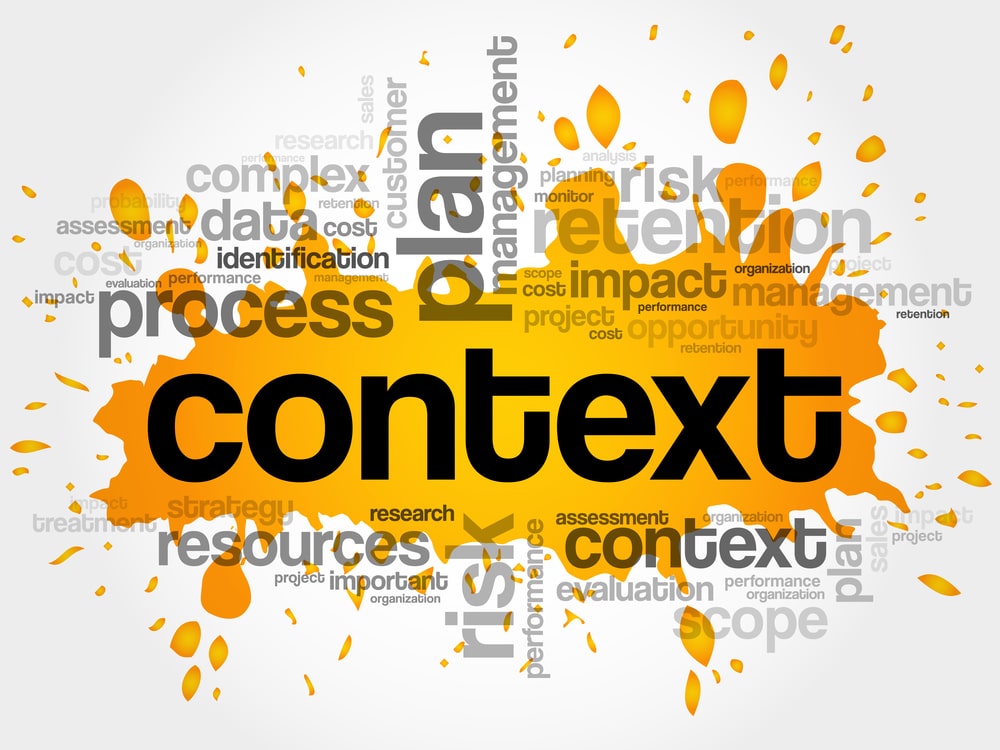 Have you ever received a text message that caused you to stop in your tracks, frown and quote Scooby Doo’s puzzled “huh”? If you’re anything like most people, your answer to that question is yes, which means you’ve had the experience of being inserted into the middle of a conversation by someone who unintentionally failed to give you proper context. With audience attention spans at historic lows and audience expectations at all-time highs, public speakers are often guilty of the exact same offense. Ironically, they’re the ones who can afford it the least.

Let’s start by putting context in proper context, so to speak. Imagine that you’re looking at a bulls eye with three concentric circles. We’ll begin with the center circle (bulls eye) and work our way out. The innermost circle represents your concept . . . the implied or implicit unique viewpoint that you hold about your topic. The next one out, the middle circle, is your content; it represents the story, facts and statistics that constitute your message. The third and outermost circle is the context of your message. It is the circle that we will focus on here. Context is the circumstances that immediately proceed or follow an idea or concept. Its main function is to clarify meaning.

A perfect example of context is my opening question about receiving a text message that caused you confusion. That question set the stage for everything else that followed. When your presentation is not clicking in the minds of your listeners, the problem can usually be seen in real-time because the audience will have “context face,” meaning they are crying out for clarity. Here are five ways for you to use context clues to increase the clarity of your next speech.

In each of these examples, I’ll use a lectern as the focal point so that you can clearly see the distinction between each context clue.

A lectern, which is a stand with a slanted top used to hold written notes, is often a crutch that limits a speaker’s effectiveness.

This context clue enhances clarity by simply defining the word lectern immediately after its use  in the sentence.

The speaker asked the stage manager to place a bottle of water under the lectern because her throat was usually parched halfway through her presentation.

If you were present at the time of this conversation, seeing where the water bottle was placed would be your context clue.

Prior to arriving at the venue, the speaker requested that a podium be placed stage-right. When he arrived for his walk-through and saw a 6 X 6 pedestal for him to stand on, he had a brief meltdown, to put it mildly. After speaking to the house staff, he realized that he should have asked for a lectern instead.

In this example, the speaker got the exact opposite of what he thought he requested. Relating his conversation with the house staff put the issue into the proper context.

The speaker placed his notes on the lectern and then walked out to center stage because he knew he would be more impactful in the full view of his audience.

In this example, there’s no emphasis on the word lectern; however, its importance can be inferred by reading the remainder of the sentence.

5. The Punctuation Clue (When you’re crafting your speech)

Below are three different ways that punctuation can be used as a context clue.

A lectern, or stand for notes, is routinely used by public speakers.

A lectern (or stand for notes) is routinely used by public speakers.

A lectern is a tool routinely used by public speakers. It is a stand with a slanted top.

The best presenters bolster the audience’s understanding of their most important points by strategically sprinkling context clues throughout their presentations. Never forget that if you confuse them you are guaranteed to lose them.